Woke up before it was not-dark and snuggled with Kamille. Nothing like someone else’s soft skin and warm body. The comfortable way limbs intertwine when you’re not quite awake yet.

She followed me around the apartment as I got ready, wearing the purple United Colors of Benneton blanket.

She looked out the window.

“I am enjoying my new empire.”

(our balcony is still covered in holiday cheer)

I’m so tired everything feels see through…

Interesting, I am on the other side of this pasta, and this pasta does not exist.

Submitted to 3 open calls – Ireland, Netherlands, and Greece. My budget for the second round of prototyping was approved. I spent an enjoyable afternoon listening to Song for Masahiro and watching fan review videos. “You know I love braided cabling, so that’s a big plus for me.”
Kamille wrote and said she had a fun day smoking with Jacopo, eating panini, having a drink, exploring the city center, buying warm tights. Made me feel relaxed.

After Mensa Googs led Akanksha and I to a locked gate. We were running late for a meeting with Modular Space.

We climbed the fence, a guard stopped us, we asked him directions, he gave us directions.

Modular Space is huge and has Funktion 1 speakers. The people organizing the parties gave us a beer. Said 300 bodies in the space didn’t feel crowded. We would need to pull in €3000 of guests to make a worthwhile night. Akansha talked about getting Absolut to sponsor us.

When we got back to Fabrica we found out how much trouble we were in. Apparently climbing the fence triggered an alarm system that had all of Benetton and Fabrica looking for us. I wonder if security cameras had caught me ironically flipping off the Benetton campus. After a meeting with Monica Faggin (to receive a slap on the wrist), and a phone call with (saint) Marta I wrote an apology letter to Carlo (C.E.O), Sam, and Angelo. Sam and Angelo laughed. Months later, when taking a design department group photo Sam asked why we couldn’t just climb over the guard rail . “You can get in trouble for that sort of thing here” I said. He winked at me.

Went to the bank and had a pleasant chat with Fabio, he asked about the coding workshop for which I was transferring money. I had emailed Marta/Angelo to say I would be a little late but I was a little early. I took my (ever-broken) bike to the shop so I could be a little late, as promised.

Angelo was getting a ride from his flatmate. He waved and smiled at me.

Jenny, Ainhoa and I swam/danced/rowed/hopped-on-one-foot to mensa.

There was a beautiful sliver of sunlight spilling from a column. I took a picture, holding my dirty espresso cup with my pinky. Lorena came over, said:  “Instagram!” #Column  #FabricaFashion

Okay but here we go: A group of older men walk to the laundromat at twilight. As it grows dark they push each other around the parking lot in shopping carts. The mood is sweet. They are having a lot of fun. They are wearing high end designer jewellery.

New interaction design trial, Paul, worked at Google. I gave him a tour. We waited for the others to get out of Thailand mtg to go to mensa.

Sam gave me a ride.

I was feeling unstoppable. I went upstairs and took the things out of my backpack and said hi to Nicolas.

I danced-sprinted to Panorama and bought apple cider vinegar, radicchio, etc. I ambled back through my little adopted medieval Italian town and gave €3 to a man who was lying about why he was asking me for €3.

It got dark
We got drunk

I was going to walk to Modular space, had the map loaded, pockets loaded, was loaded. Got a message from Ainhoa, went to Kenzi and Quentin’s (Kentin’s). They were drinking coca-cola-wine. They insisted I come with, to Django, my sore butt posted on the back of their bikes. (My bike, the Sabatager, was broken, as always)

A hug or two or three from every friend. The people at the door remembered me. There was bad Italian metal, we all danced. I got Kenzi on my team. We ordered a taxi to go to Modular Space, it never came. Kentin left. Leo found the dream Italian boy and went back inside for to pursue. (Turns out it was Carlo who I had chatted with before, he’s an organizer at Django who works with refugees by day). Ainhoa also went back inside. Jenny and I followed. I tried to lure them with me, then walked away.

Gotalittlelost. Phone out of batt. Found a fluffy thing on the sidewalk. Later saw one in a luxury store window, on a belt.

Got my backpack from Kentin’s. Plugged my phone into the mobile battery pack and sat on the stairs. After 20 minutes or something phone still didn’t turn on. It was 4am. It was cold. I ran home and dove into my two beds.

There was a basement in Cash’s apartment/Ghost Ship that no one knew about. I went into it and scooped up 40 or so sleeping bats in my arms. I dropped one as I tried to bring them upstairs and I think it hit its head and died, but I had to keep going to try to save the others.

The bats started to wake up and fly around. A girl with short black hair, who lived in the apartment, was freaked out. I was focused on containing the bats in one room, on keeping them safe. Those that had emerged from slumber turned into black kittens (except one that was orange). They were stumbling around… just opening their eyes.

Before transforming one of the bats telepathically told me that the group needed to go through the passageway underwater, that they couldn’t exist in this world for long.

So I went with the group underwater, into a dark river of a different dimension. All the spirits had turned into glowing fish, then… streams of light.

Writing about the dream makes cry. (In a little Bar by Fabrica, on my way home).

I get this feeling, a soft lurch in my sternum, inside the energetic movement is this deep, tragic loss. I can’t touch through the membrane in which the feeling is contained. It comes and goes.
…
Today I woke up at 8:30, all refreshed, like “damn, the extra 15 minutes makes all the difference!

I picked up my shirt at the tailor, it was €11, then I got tofu and soy sauce at Itin Food (only just looked at the receipt and noticed the wordplay). After working on music, posting on my blog, and drawing for a little bit I was ready for a vodka soda, Alexis and I went to Ins Supermercato.

Jacopo came over with a bunch of pistachio cream pastries and prosecco, made dinner for him and Nicolas. I planned a party with Akanksha and Antti. I made a playlist for the party. I went downstairs, gathered friends, and went to the party.

At the party, I got white-kid-wasted. I danced as much as I would have if I was sober. I talked more than I would have if I was sober. The going-home-parade landed in our flat. I was thinking of making pasta, having skipped dinner (clear correlation to my level of intoxication). When the neighbors came to complain I made a beeline for my room, hid under the covers, and promptly fell asleep.

Alexis was jet lagged and looking forward to going to sleep early. “No you have to party” I said. And we did. Isaac and Shek were both leaving. We danced around with a bluetooth speaker and rotating DJ. Shek kept coming with trays of egg rolls and dumplings. We lifted Isaac in the air a few times. 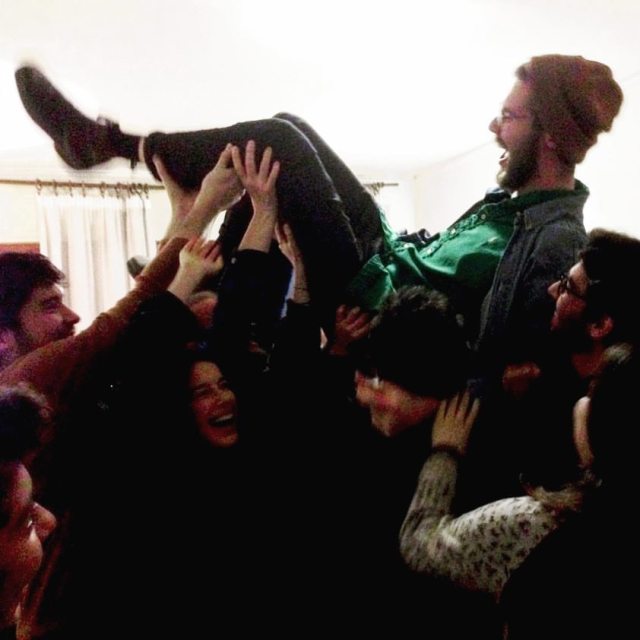 Shek gave us all polaroids of flowers arranged in letters against a black background. At the end a few people kissed in the foyer, among them Ali and Quentin, so I heard later on the bus. As we paraded home I exclaimed to those around: “I want to kiss my friends too!”

The feeling of waking up in a new city with a blank itinerary, and a beautiful date brings you perfect coffee in bed.

I learned the word Blümchensex after having had it.

Dear blog, remember when I was saying that all I wanted to do was to fall casually-deeply-in-love? I fell deeply, repeatedly, into serotonin-laden eye-contact – on U-Bhan, in a dark bar with reclaimed furniture, at a vegan “raw meat” Syrian restaurant…

Within an hour of arriving in Berlin, I found myself on a date with Kamille. We shared a big meal at an Indian restaurant, later reflecting that this was a good way to start our marathon-date, because we both ended up with new-love-appetite-lack in the days following. The word for it in German is more elegant, but I have forgotten what it was.

It’s inevitable to share words about words when you’re dating a trilingual-trans-Polish-girl. 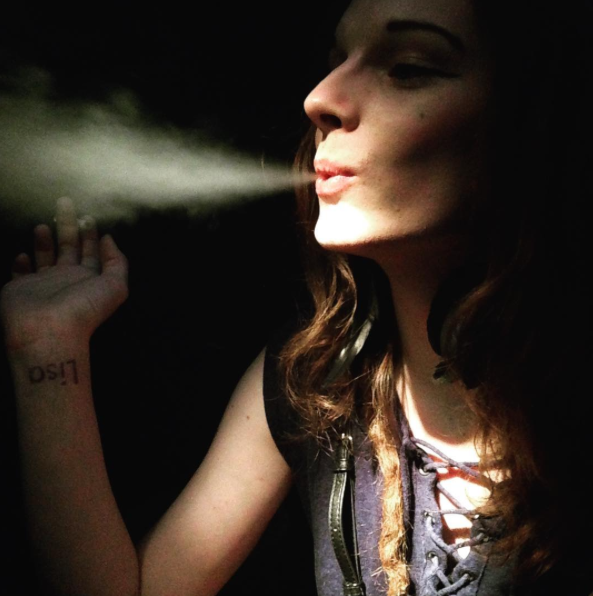 Continuing to fill the archetype of “cool friend who lives in a cool city” Alfonso now lives in Berlin. We met up at at a smoky hole-in-the-wall bar with good, loud jazz – talked about the line between as the thing; ephemeralism and minimalism as privileged life-choices; post-WWII-hoarding, the next wave of re-settled refugees as hoarders; firework-wars between neighborhood-kids on New Years and the days preceding, and how to get from party to party without ending up in the cross-fire.

In our conversation about social class/the ability to consume ethically, we realized we both had scars from the crystals kept in pockets of our second-hand denim. Fonzi was about to explain. I laughed and said, “oh no, of course I know why… we’re both from Santa Fe.” And speaking of where we’re from, we discussed the Great American Road Trip, but in Europe.

My process of living in/moving from cities involves the collection and dispersion of houseplants. “No” said Alfonso, “rent a car and take your plants with you.” He has been doing road trip photo series anyway – we’d make it an art project.

Tucked between bio food groceries, luxury cosmetics, and a designer rug store in Mitte is a dark graffiti-covered alley, leading to controlled-rent housing-projects. You wouldn’t know they were there if you were passing by. I found myself in the Leftist/Female/Lesbian/Trans/Refugee project in on New Year’s eve (unsurprising).

One of the refugees who lives there made a giant vegan feast. Everyone danced together to a mix of traditional Cameroonian music and international pop hits. The whole city was full of fireworks, neurochemical and otherwise. Pop! Pop! Pop! Pop!

Moments after walking through parks and streets of magnificent multi-directional noise-music (midnight fireworks, in close proximity to bodies) I learned that the community I was with had thrown a solidarity party for the Oakland fire victims. Around this time Alfonso messaged me and told me he loved me. I started weeping and it was the highlight of my trip.

Last New Year’s I spent the morning studying for the GRE. Sarah and I joined Crocket and Sandra in LA on a whim. In the afternoon I ran into the ocean in a black turtleneck and skinny jeans, then walked around wet for a few hours. I wondered where I would be in a year.

The answer is Berlin, in exactly the same outfit, but wet in a different way.