Jeremy reached the bottom of the “U Curve” and wanted to see Harry Potter. When I heard this second hand I said: “Oh, well we should go then,” but put no further effort into it. One flatmate (#4), Liz from Boston, announced she would make us pasta, so after I checked internet in the rain I came home expecting a family dinner, but no one was home. I made a snack of miso with scallions, shitake mushrooms and chili sauce with toast and watched Australia’s Top Chef. which is unlike American reality TV because every contestant is polite and says nice things about their opponents. Then I went to sleep at 10:00 pm. 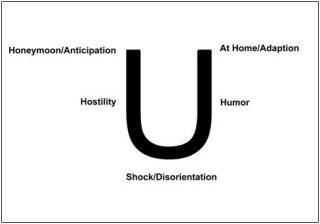 The next day I walked around in the rain, acquiring a student ID, adding money to the ID account, and printing out resumes. By the time we met up with Joanna, our moral support/activities adviser, I looked like I’d been swimming in my pea-coat.

Noticing the state of the students Joanna offered: “I know it seems depressing because there is no one here and its raining heaps, but it will get better.” She talked up some of the activities we can chose from this semester, saying she hates worms and is claustrophobic, but will take students on a tour of caves with glowworms and reckons it will be awesome.

She referenced my DJ skills and how I’m her “Indie Kid” of the semester. She questioned: “Why are you in Australia? Mostly I get big university blokes who want to meet a crocodile dundee” I told her it was an arbitrary decision and wondered if I had made the right choice.

Jeremy approached me after the meeting,  asking about how I was going to Sydney just then, so I invited her along. I had figured out a route beforehand, but she thought the bus would be cheaper than the train, so we deliberated over a new route. Sydney presented us with rain-shined architecture. We shared her umbrella and headed the wrong way on a free shuttle.

When we made it to the salon I was modeling for people with cool haircuts served us tea and biscuits, one of them stroking my hair to figure out what she would like to do with it.

Afterward we ate at a place called “Sugarcane” which had a modern interior with organic shaped light fixtures on pale gray walls, a tiled counter in different shades of green, and completely stainless steel kitchen (I’m mentioning this because I forgot my camera). I had a thai chili dish with perfectly fried eggplant for $12.

Sydney is unlike New York because if you look confused people go out of their way to help you rather than calling you an asshole. Our waiter pulled out his laptop to find the bar we were meeting Jeremy’s friends at in spite of the restaurant being busy. Between asking for directions from every passerby, despite my confidence, Jeremy complained about how she hates Macquaire and wants to transfer to U Sydney. I sympathized. She is trying to transfer and  Joanna is trying to convince her otherwise, using me as bait. That made me think: “Oh, well maybe I could transfer.”

U Syd has grassy lawns and “old-school” architecture in the heart of a city – tempting – but then Jeremy mentioned that there’s a $2,000 penalty from Butler for leaving the school you enrolled in, plus another couple thousand to enroll at another school late and secure housing. I didn’t realize anyone else was disappointed with Macquarie’s location or aesthetics, but by the 23rd or so time the point was reiterated I didn’t feel that way myself anymore.

Luckily, after Jeremy’s friends were found I ran into a few of my U Syd friends, and keeping with a tradition established during orientation, Shane Trujillo gave me 3/4 of the beer he didn’t like. I chatted with Grant, who is ironically fulfilling his American Studies major requirements while abroad.

Around 11:00 pm, when it was really getting fun and my friends were tearing up the dance floor we had to leave to catch the train. Or at least I thought that was the plan, Jeremy followed her friends to another bar. Once we got there and it was too loud I suggested we make sure we catch the train, which we didn’t do – we had missed the last one.

Jeremy hailed a cab to take us to Central Station, where apparently there was still one more train. She was on the phone so I paid the $14. I was taking in my surroundings to figure out how to get to platform 16 when Jeremy started running, I figured she knew where we were going and followed her – she didn’t know where she was going. We ran back the way we came and I couldn’t keep up so we missed the last train at by 3 minutes, and got a cab back to the city.

Through all of this she swore and said: “of course.” I was happy to be in a new city figuring things out. It could have been a lot worse, someone could have lost a tooth! However, losing a tooth is far from the worst thing that could happen, just ask me! Jeremy’s desire for flawlessness made me reflect on my own perfectionist tendencies and realize that I have become more accepting. It’s water under a bridge on a duck’s back. Back at the bar at just after 12:30, the friend I was staying with was having a nice time drinking so I hung around like a sleepy ghost, making friends with an International Relations major from Costa Rica. Everyone was daring me to do a shot, but its about $8 a shot in Aus. In the end I asked the bartender about vegan options and he gave me a shot of Tanqueray with peach and lychee while everyone else had something blue that fizzed. I was about to pay when I realized the bill was settled, and everyone was too drunk to realize I hadn’t pitched. Making change is too complicated with big bills, so I accepted the gift unwittingly bestowed upon me.

We left the bar, bought some pastries, warned a couple of drunk kids that the cops were after them, and went back to the cold dorms. My pal gave me her bed even though I should have been the one sleeping on the floor. She took her comforter and pillow and I slept under a sheet and my wet jacket (there are no heaters in Australian student housing). I woke up bolt upright at 9:00, realizing I had forgotten about an interview at the KIT Macquarie Brain Imaging Lab at 11:00, thanked my friend, and hurried back to the train station, where trains were running late due to wet weather. I had my flatmate look up the number to call to inform them I would be running late, but it was the wrong number. Then I arrived ten minutes early.

Riding the momentum of a good interview I found a coffee shop that was hiring, and had a nice cappuccino with a fern pattern, so if I get a job there hopefully I’ll learn that trick. The moral of this long winded fable is that its easy to ride momentum, you just have to do it in style.